Does Society Discriminate Against Exotic Dancers?

We would like to think that when it comes to the adult entertainment industry, we live in more enlightened, better-informed, more open-minded times. To a very large extent, that is actually true. The level of public acceptance for the adult entertainment, particularly for those working as dancers or strippers has never been better. Society as a whole is slowly but surely more and more tolerant of those who work as exotic dancers or strippers.

Unfortunately, it’s the “slowly” part that has to be considered, too. While those who are accepting of the adult entertainment industry are becoming a larger and larger group, there sadly remains a large section of society that discriminates against adult industry professionals.

Becoming an exotic dancer in Va beach, or taking on any job in adult entertainment, is certainly a worthwhile career. It affords anyone willing to work hard and be creative and outgoing the opportunity to meet interesting people, make a ton of money, and provide a valuable service to women and men.  Nonetheless discrimination does happen based solely on what they do for a living.

The Adult Entertainment Industry as a career

As rewarding a career as adult entertainment can be, as much as society is slowly coming to accept the importance of people being able to express their sexuality in safe environments, discrimination continues to be a problem. Those who work in the industry are viewed by some as carriers of disease, suffering from low self-esteem, being forced to work in the industry against their will, and other unpleasant assumptions. There is certainly an unscrupulous characters involved in the adult entertainment industry, but the fact of the matter is that if one is careful and informed it isn’t hard to steer clear of the bad elements. The legitimate, ethical adult entertainment companies believe in quality adult entertainment, safety, honest business, and treating their adult entertainers with the utmost respect. This is a fact, but there are still a decent portion of people who do not see it that way.

It’s ironic that those who publicly judge strippers and adult entertainers in general are also usually the ones calling privately to arrange adult entertainment.

Will this change?  It stands to reason that it will as time goes on, but anyone who considering a career in this field should understand the discrimination they may find themselves running up against and those in a position of authority shouldn’t let their personal feelings about another person’s occupation have bearing on an unrelated decision. 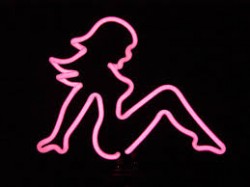